An economy that does not grow? 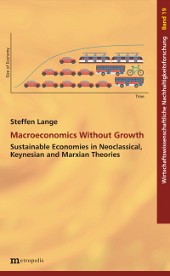 There is now plenty of evidence that economic growth is highly problematic for human welfare and survival. The evidence comes from three domains. 1) The ecological: continual growth uses up the resources that supply and the sinks that take the waste from human activity globally. 2) The social: economic growth does not correlate well with human welfare and its supposed benefits, rather than being shared, become ever more concentrated at the top of the wealth and income pyramid. 3) The economic: economic systems that rely on perpetual growth are inherently unstable, and meet internal and external constraints (or contradictions) that undermine them.

While it may be clear that the wager on endless growth is a bad one, a more difficult question arises: “what would be the characteristics of an economy that does not grow?”.

In his book “Macroeconomics Without Growth1” Steffen Lange attempts to construct a framework for answering this question, rooted in the three main approaches to theorising the economy, hence the subtitle: “Sustainable Economies in Neoclassical, Keynesian and Marxian Theories”. The book is a valuable contribution to the theory and practice of degrowth and provides a solid grounding for interventions in the policy arena, including those by political parties that seek to construct a coherent alternative, rather than a mishmash wish list of proposals. A strength of the book is its rigorous, formal analysis of the main theoretical approaches and what they say about the preconditions for growth, and the possibilities of zero growth.

As such the book extends to 583 pages, and the detail, with recourse to mathematical formulae to capture the various models and sub-models, will mean that many will not read it. The aim of this essay review, then, is to summarise the book, emphasising the synthesis reached by Lange, and suggesting a few issues that arise.

In search of the macroeconomics of post-growth.

Lange sets out to answer a specific research question, “which macroeconomic conditions lead to sustainable economies without growth?”, where “sustainable”, refers to environmental sustainability, social welfare and economic stability.

First, some clarification about the term “economic growth”. In everyday speech, and that includes that of politicians, journalists and other commentators, “economic growth” is typically used without definition. It can generally be assumed to mean growth in Gross Domestic Product (GDP) at national level (and for groupings of countries when added together), or Gross Value added (GVA) when used for sub-national economies. It will generally be corrected for changes in prices over time, and for country to country comparisons, corrections are made for population and for some purposes, for local prices: there are methodological choices made ,and controversies about, such corrections. However, “economic growth” might also refer to growth in incomes, or to growth in the material aspects of the economy, that is to say, the volume of products made or consumed. These distinctions are important since the discussion to follow does concern the relations between GDP growth and change in the volume of materials and energy that flows through the economy, and the extent to which it comes out at the other end as pollution. However, for most purposes, it can be assumed that in most non-technical discussions, it is GDP or GVA that is meant by “economic growth”. GDP does, however, correlate well with the material flows of an economy (as evidenced, for example in carbon emissions). In scholarly work, the terms are more usually defined when used.

Lange begins his book with an overview of the key issues for the macroeconomic dynamics of growth. Central to this is the debate over decoupling of GDP growth from environmental impacts (on resources and sinks). The growth advocates suggest that because GDP measures aggregate value rather than material flows, change in one need not follow the other. Moreover, it is often argued that growth is needed to fund the investments needed to reduce emissions and to substitute for unsustainable resources. The growth critics argue that such decoupling between GDP growth and material flows is unlikely to be achieved at the levels needed to mitigate the damage.

Lange explores these issues in detail, bringing in the relevant economic concepts. He then identifies the existing alternative approaches, broadly Daly and collaborators’ Steady State Economy, the European continental Degrowth literature, Prosperity and Managing Without Growth in the work of Victor and Jackson, and from the German language literature, Postwachstum. While these approaches do use concepts from ecological, Keynesian, and Marxian economics, Lange notes that they are not generally based within a macroeconomic framework, one that seeks to understand how the economy as a whole behaves. They also do not draw on the dominant neoclassical approaches. The result is the “research gap” that he identifies:

“… a lack of research on conditions for economies without growth based on well-established, comprehensive, macroeconomic frameworks” (pp. 29-30).

The heart of the book is a detailed exploration of neoclassical, Keynesian and Marxist economics, asking how they understand economic growth and its drivers, whether a non-expanding economy can be envisaged within each framework. In doing this there is a particular focus on the interplay between technological change, money, investment, profit, expenditures by different sectors, consumption and labour productivity.

Each of the three paradigms, neoclassical, Keynesian and Marxist, is itself diverse and Lange, even in such a long text, is necessarily selective. This is particularly the case with the Marxist contributions where he only focuses on Marx’s classical account and the monopoly capitalism revision associated with Baran and Sweezy and authors associated with Monthly Review (and the Marxist ecological economics also associated with this current)2. Nevertheless, there is sufficient material for him to extract key ideas from the three paradigms and it is these that inform his conclusions, the focus of the next section. The surprising finding is that from each of the three paradigms (and their variants), the preconditions of an economy without growth can be extracted.

A model of sustainable economies without growth.

Where the book is particularly helpful is in the closing chapters. Here, on the basis of his investigation, Lange synthesises an overall macroeconomic model of an economy without growth. Because that is likely to be of most interest to a majority of readers, I’ll set this out here. Inevitably, this misses out many subtleties and steps in the argument. As you will see, the implications of Lange’s review are not a matter of minor tinkering but indicate the need for a major overhaul of the economic system.

An economy that does not grow has the following overall characteristics.

On the supply side of the economy, production levels are constant, gross investments only occur at the level of capital depreciation, technological change is re-directed to clean production, and working hours reduce. Note that firms have no incentives to invest above the rate of capital depreciation because of the pressures to stay small and local (diseconomies of scale). Firms are incentivised to improve resource efficiency. Increases in labour productivity are modest, because energy and other resources are expensive. Any increases in productivity go towards the reduction of working hours: collective ownership militates against dismissals while people prefer increasing leisure rather than increasing income.

On the demand side, private consumption and government expenditure stays at a constant level and shifts from dirty (i.e. environmentally damaging) to clean products. Personal and household consumption stays static because incomes are not increasing and “the sales effort has been largely repealed”. Government spending stays static since it is not needed to expand employment. Private and State consumption shifts towards cleaner products because the ensemble of production factors in this economy makes them relatively cheaper. Moreover, political attitudes favour cleaner products.

With regard to money, there are no savings and no continuous expansion of accumulated assets by any sector or grouping. This is the result of zero net investments. Without growth, asset accumulation by one group would require the accumulation of debt by another. The lack of accumulation is achieved through low economic inequality, redistributive government policies and banking system regulation.

These conditions lead to the following outcomes for the economy as a whole.

Lange is clear that there are limitations to his work. Firstly, the analysis is for closed economies. We know that the current circuits of extraction-production-distribution-consumption-pollution are global in nature. They involve massive power and wealth imbalances – Western economies have rested for at least 200 years on the exploitation of resources, labour and markets in poorer countries. Moreover, a country attempting to move to a no-growth model would have to deal with the instabilities and pressures arising from the tendency of other economies to grow and the interdependence of national economies in global markets.

This leads onto the second shortcoming: there is, as Lange points out, only sporadic treatment of political economy, the interrelation between power, as politics and economics. The dominant system of power actively maintains the present capitalist growth economy and, as he acknowledges, it has to be confronted and itself transformed if there is to be any real change.

“Many of these policies stand in conflict with the interests of strong social groups. In particular, the interests of the capitalist class … or oligarchy.. These groups would lose major parts of economic wealth and income and the ability to accumulate capital…. Strong social movements and alliances between different (in particular the labour, environmental and feminist) movements are the most plausible manner to implement these conditions anyhow.” (p. 537).

Thirdly, and related to the previous point, the policy dimensions are presented in relatively abstract terms rather than as “oven ready policies” that a government might be able to implement. As a macroeconomic account, the book does not concern itself with the vital question of who implements the implied changes to the system: what is the balance between top-down and poplar, bottom-up system reform, for example?

A fourth shortcoming is the limited consideration of land as a unique and finite resource. Countries are, by definition, defined by a delimited geographical area, which is differentially valued and valuable based on relative location (i.e. land in the City of London versus land in rural Yorkshire have different relative values). Indeed, the extent to which the economics of land as a unique factor of production, or as a “fictitious commodity” is lacking in most macroeconomic theories3.

However, these shortcomings do not detract from the achievement of the book which is to produce a coherent and theoretically pluralistic macroeconomic account of the preconditions for an economy that does not (have to) grow.  It puts more flesh on the bones of the steady-state / post growth economy (something we try to explore and promote at the regional scale), showing that it is a feasible option, although it will be very different in almost every respect, from the economic system we know today.  It will be a valuable tool for those working out the detail of the necessary transition to a post-growth society, and economy and for those, in multiple sectors, struggling to bring it about.

This article is now also available at Resilience.org

3 To introduce this issue does not mean we are saying that all value stems from land.